Al-Qalzam Sea Global Company’s vision is to establish a complimentary type of a project that produces variety of top quality aquatic products in a remote area with limited natural resources. Also to provide jobs for young nationals of both sexes (males and female) and have them well trained by specialized expertise from all over the world. This will help in poverty elevation by establishing jobs near small villages as well as reducing immigration to large cities. The high value healthy products will contribute to the local and international seafood markets, and to develop an economically viable and environmentally sustainable aquaculture systems for marine fishies.

Al-Qalzam Sea Global Co.’s on-shore aquaculture facilities include hatcheries, nurseries, pre-fattening units, on-growing ponds, R&D center. Also the following facilities will be established on-shore area: Treatment Area: Located at the southwestern part of the site. This area will be planted with mangrove trees, Macro-algae, Sea weeds. This area also will be used to produce Sea cucumber, oysters and clams. As well; the on-shore project will incorporate Marine Aquaponic unite: This system will be adapted on the company’s site as well in order to produce seaweed and marine fish species in the same facilities. Caviar: The company is intending to produce caviar through a joined venture project with other global companies to full fill the local market demand and to export the production to the world fish markets.

Al-Qalzam Sea Global Co.’s off-shore aquaculture facilities incorporate the following: -  Floating cages: in the intermediate area: Located in between the natural barriers that work as wave breakers providing protection for the cages; where water depth ranges between 20-40 meters. -  Capturing Fish & Shrimp Boats - Marina: In front of the coastal line at the southern end of the project, for the fiberglass fishing boats to land. Hydraulic mechanism will be installed to transfer the captured fish directly to the processing unit. The cage farmed fin fishes will be transferred to the processing unit sharing the same transfer mechanism facility.

Shrimp hatcheries have become a popular way to supply the demand for the shrimp lover’s that are all over the world.

Fish hatchery is a "place for artificial breeding, hatching and rearing through the early life stages of animals, finfish and shellfish in particular. Hatcheries produce larval and juvenile fish (and shellfish and crustaceans) primarily to support the aquaculture industry where they are transferred to on-growing systems i.e. fish farms to reach harvest size.

Fish hatcheries are used to cultivate and breed a large number of fish in an enclosed environment. Fish farms use hatcheries to cultivate fish to sell for food, or ornamental purposes, eliminating the need to find the fish in the wild and even providing some species outside of their natural season. They raise the fish until they are ready to be eaten or sold to aquarium stores. Other hatcheries release the juvenile fish into a river, lake or the ocean to support commercial, tribal, or recreational fishing or to supplement the natural numbers of threatened or endangered species, a practice known as fish stocking.

A Fish Hatchery Manager oversees all administrative and maintenance tasks for a fish hatchery. A fish hatchery is a scientific facility that traps fish, gives them an environment in which to reproduce, and releases them once they are large enough to survive on their own. As the Fish Hatchery Manager, you supervise every step in the process, take care of the financial aspects of the operation, and perform human resource duties. 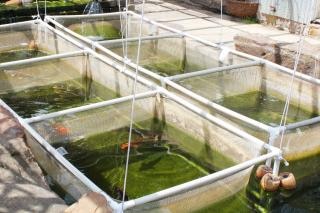 The main production will be several fin-fish species in the flouting cages and shrimp in the on-shore pond.